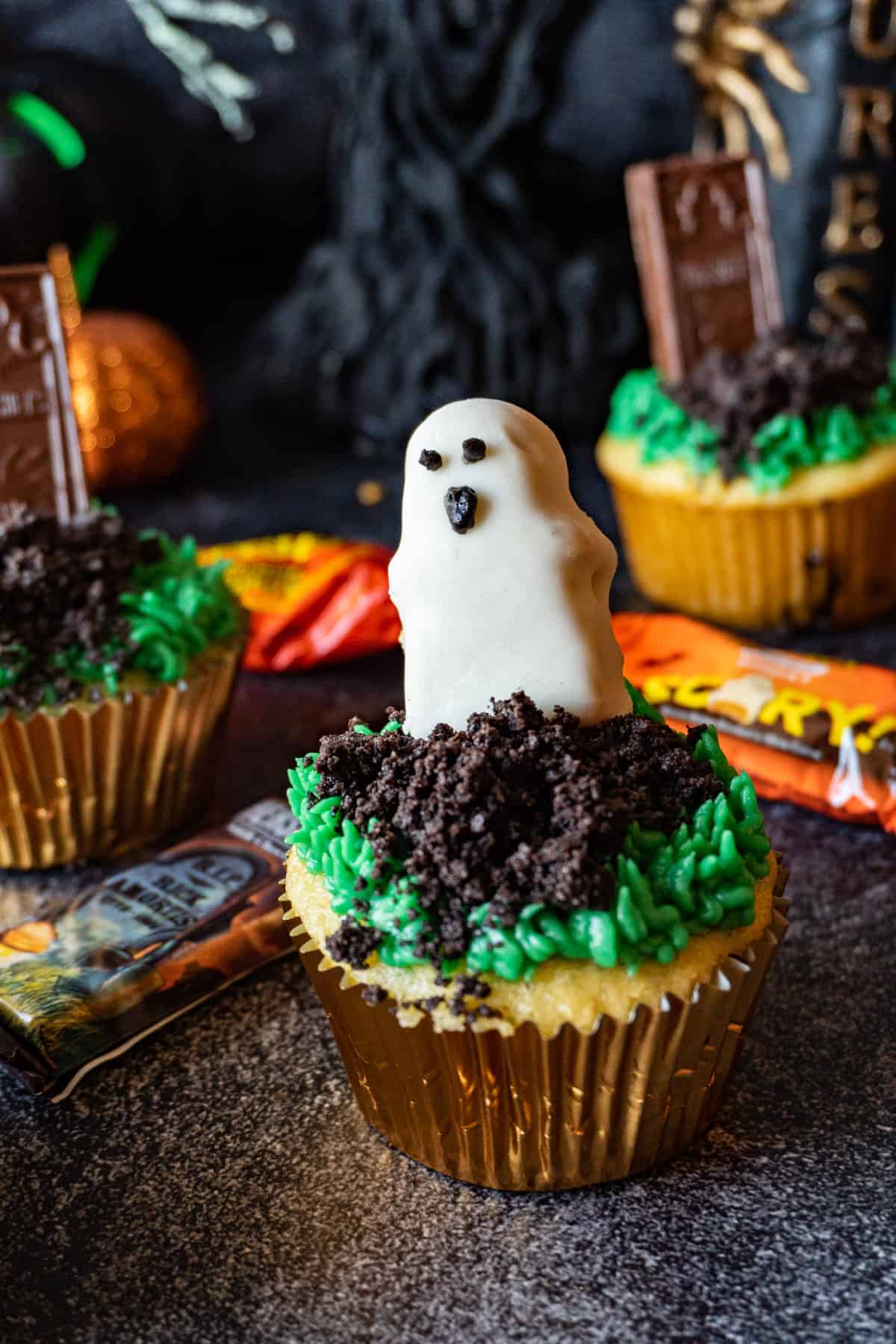 Boo! These Halloween Cupcake Ideas will make any party fun!

Coming up with fun and creative Halloween cupcake ideas is something I’ve been doing since high school. I think it was senior year when I made about 40 Halloween cupcakes to give out to my favorite teachers and the staff and I had so much fun decorating them!

I recently shared how I made my Graveyard Cake and wanted to share these fun Halloween cupcake ideas too! 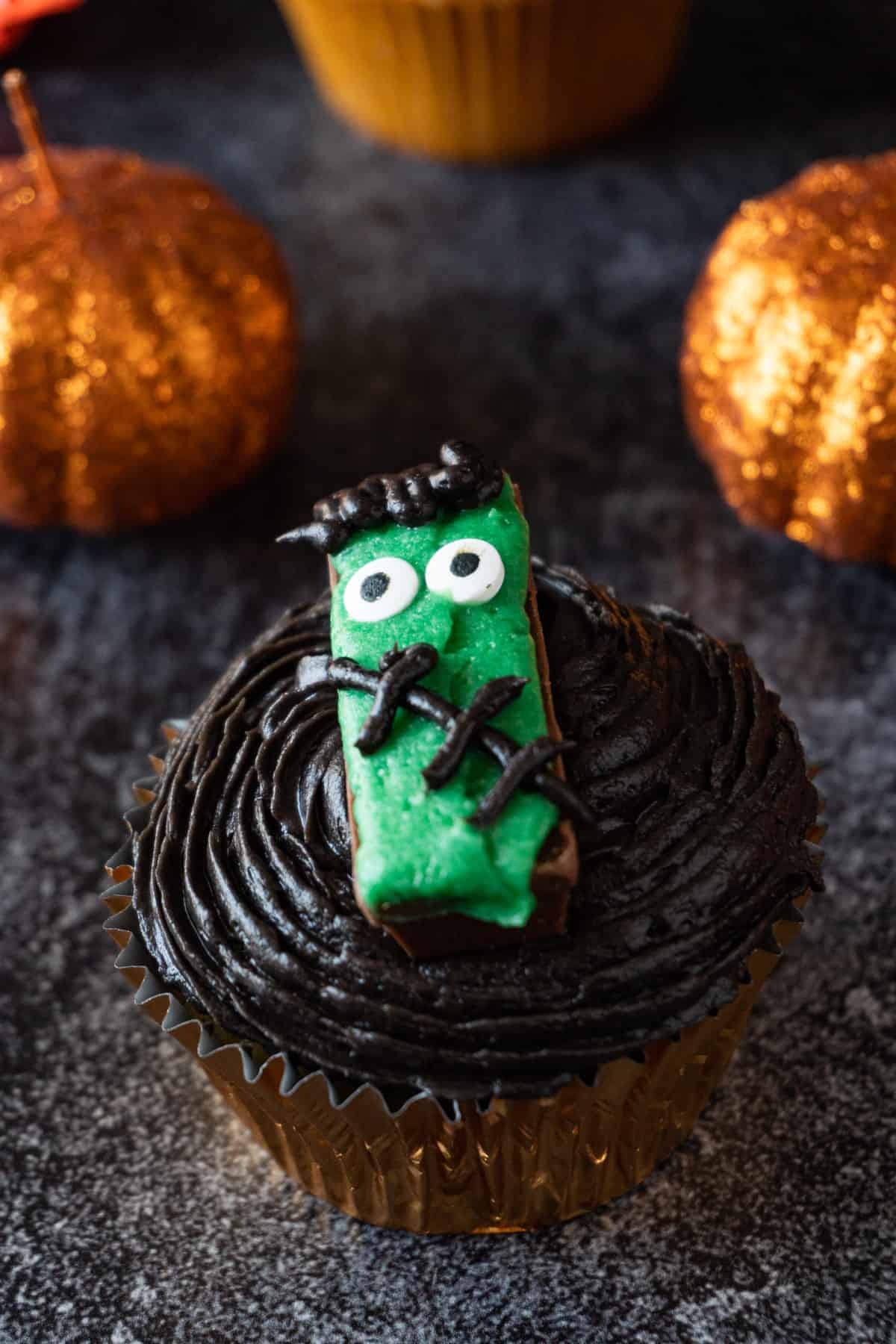 I love how easy these Frankenstein Cupcakes are to make!

For these easy Halloween cupcakes, I use a combination of colored buttercream, candy (some that have Halloween shapes and some that don’t), and candy eyes.

I also use a few different piping tips for decorating as well as piping bags for the frosting. 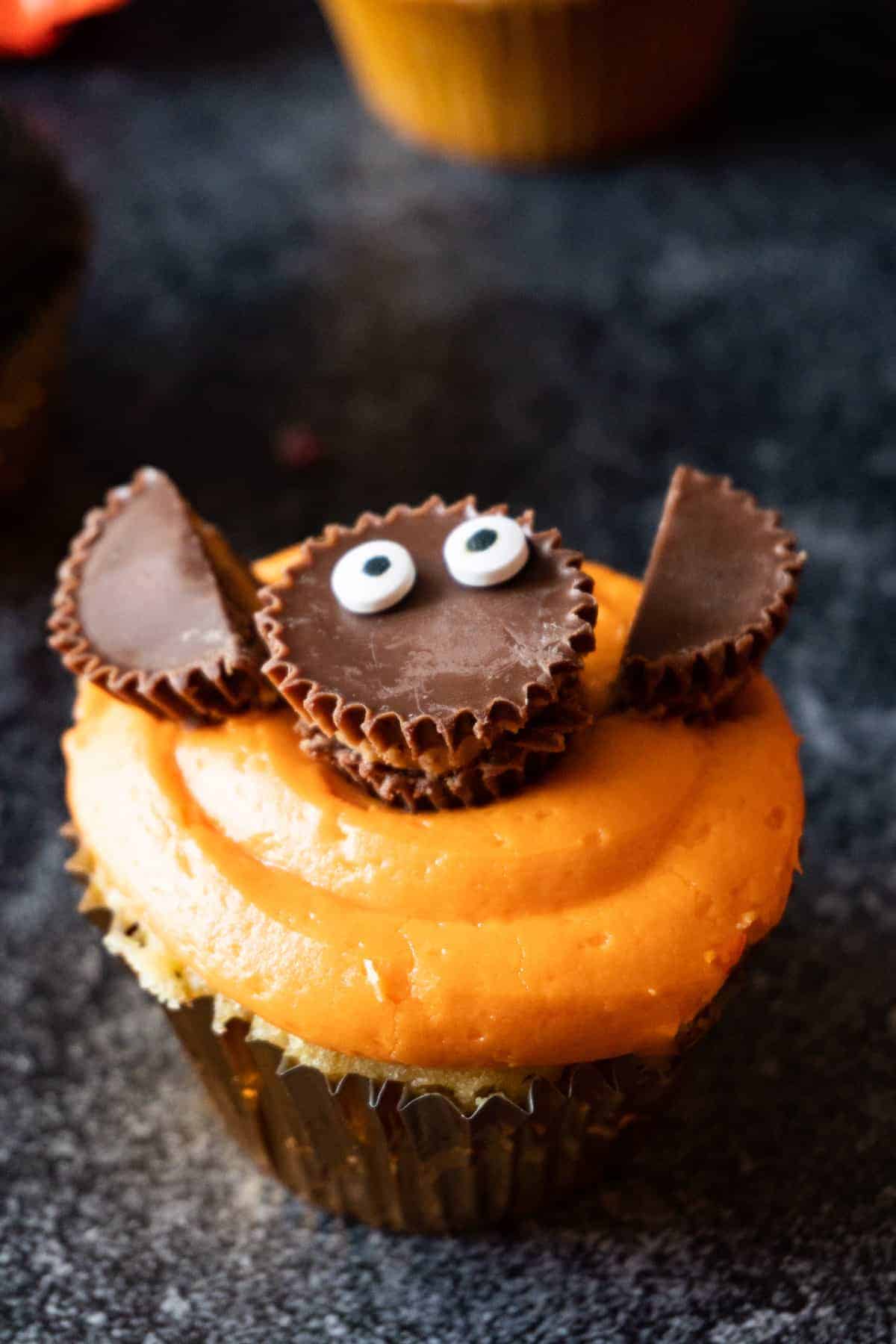 Is this not adorable!

What type of cupcakes should I make?

You can use any of your favorite cupcake recipes. I have a great chocolate cake recipe that you can make into cupcakes and a delicious yellow cake recipe too.

If you prefer just making boxed cupcakes that works fine too. If you want to spruce up your box cake recipes check out this chocolate box cupcake recipe or this easy yellow box cake recipe! 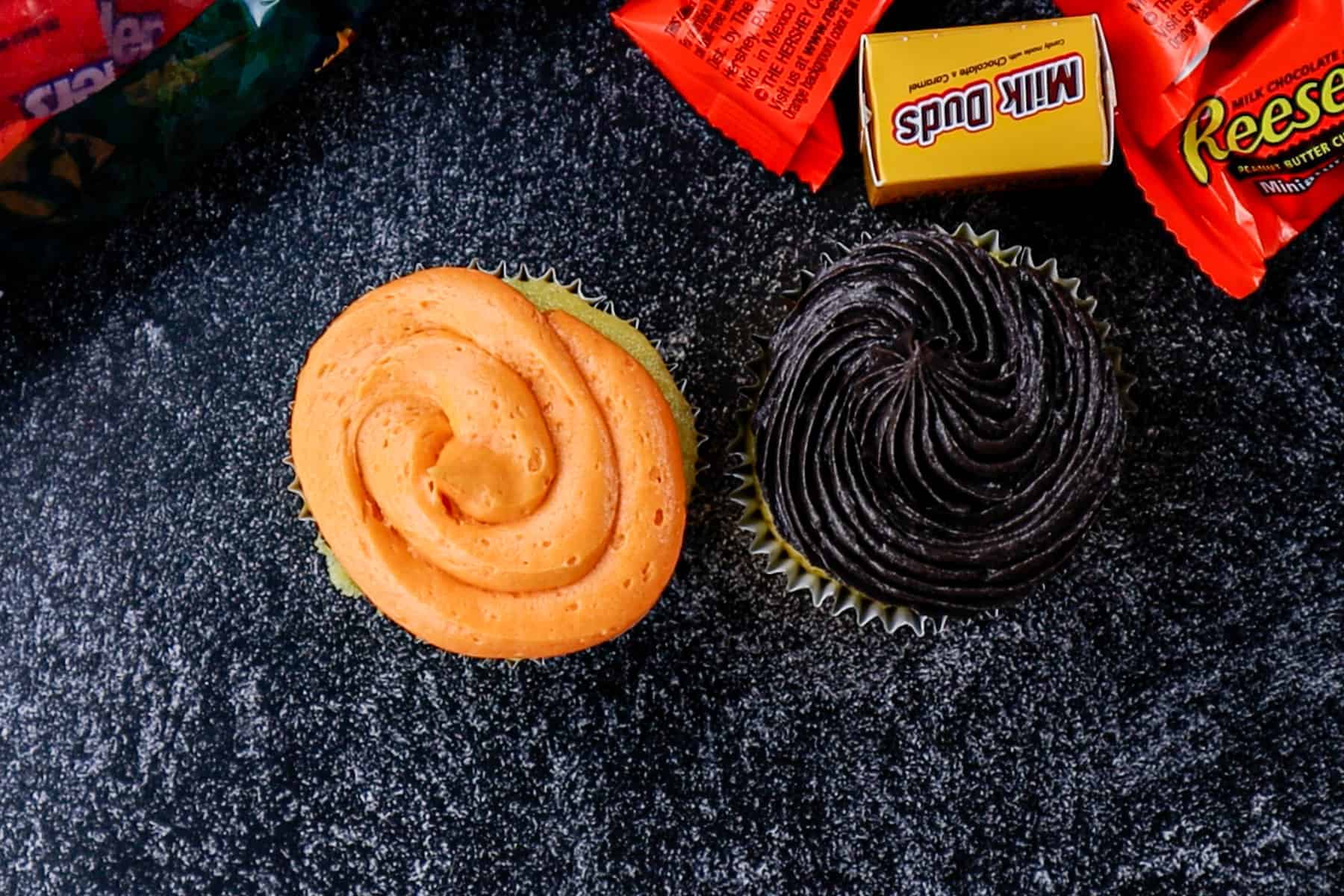 I used orange and black buttercream for most of the cupcakes.

What type of frosting should I use?

Use whatever color buttercream to frost the cupcakes that you want. I used orange and black, with a Wilton #4B Open Star Tip, and a Wilton #2A Round Tip

For orange or green buttercream, I recommend making my vanilla buttercream and adding food coloring gel to it.

For black buttercream I recommend making my dark chocolate buttercream and adding black food coloring gel to it (it will look grey at first but will darken into black).

Alternatively, you can find premade colored buttercream at your local grocery store (usually in the cake decorating aisle). Just be warned that it doesn’t taste nearly as good and can be a little pricey. 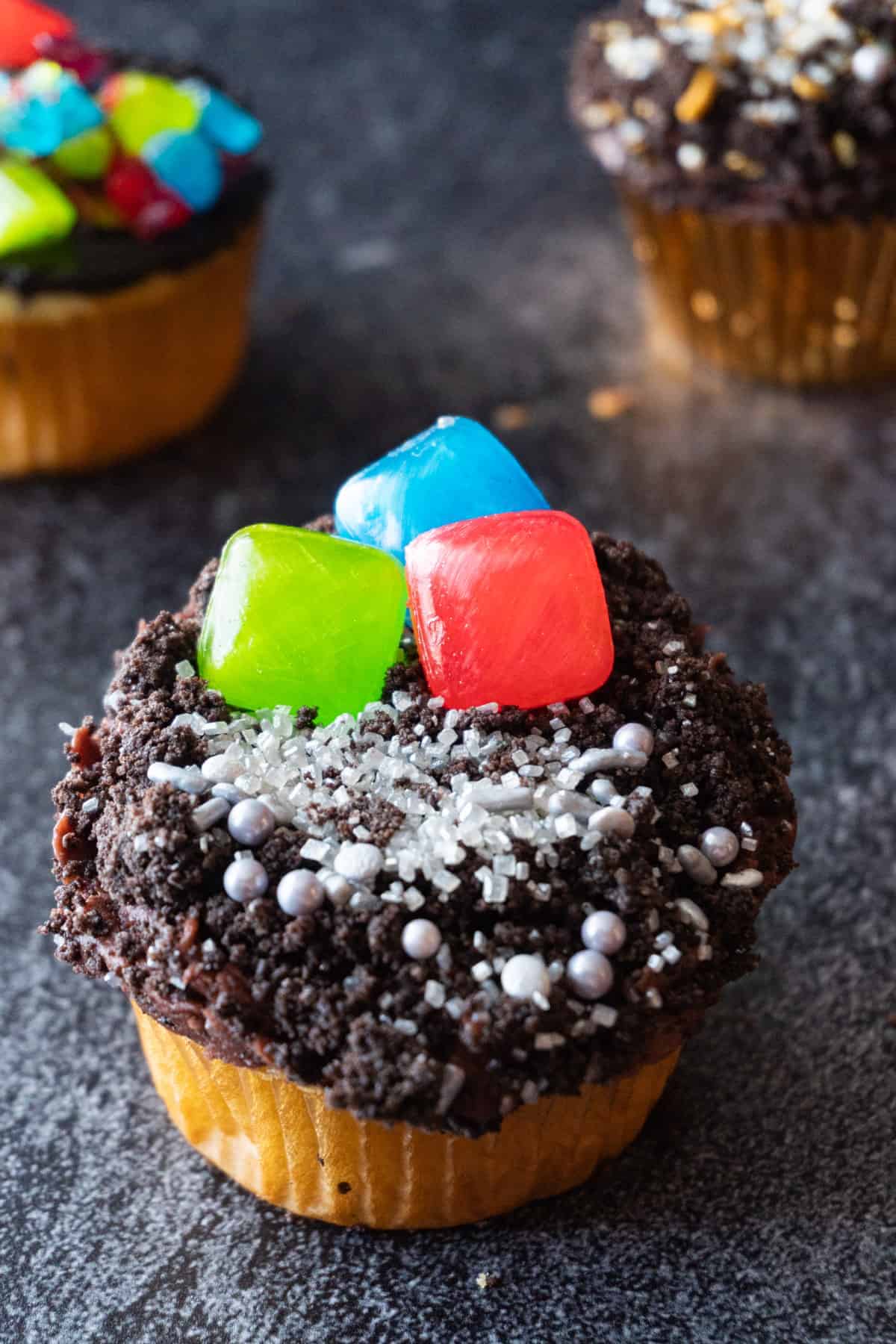 Treasure cupcakes are great for a pirate themed Halloween party!

How to make Frankenstein Cupcakes: simply decorate a KitKat with green and black frosting and add candy eyes.

How to make Bat Cupcakes: Cut one Reese’s Peanut Butter Cup in half as the wings, and use another Reese’s as the body, add candy eyes (with a little frosting to adhere them). 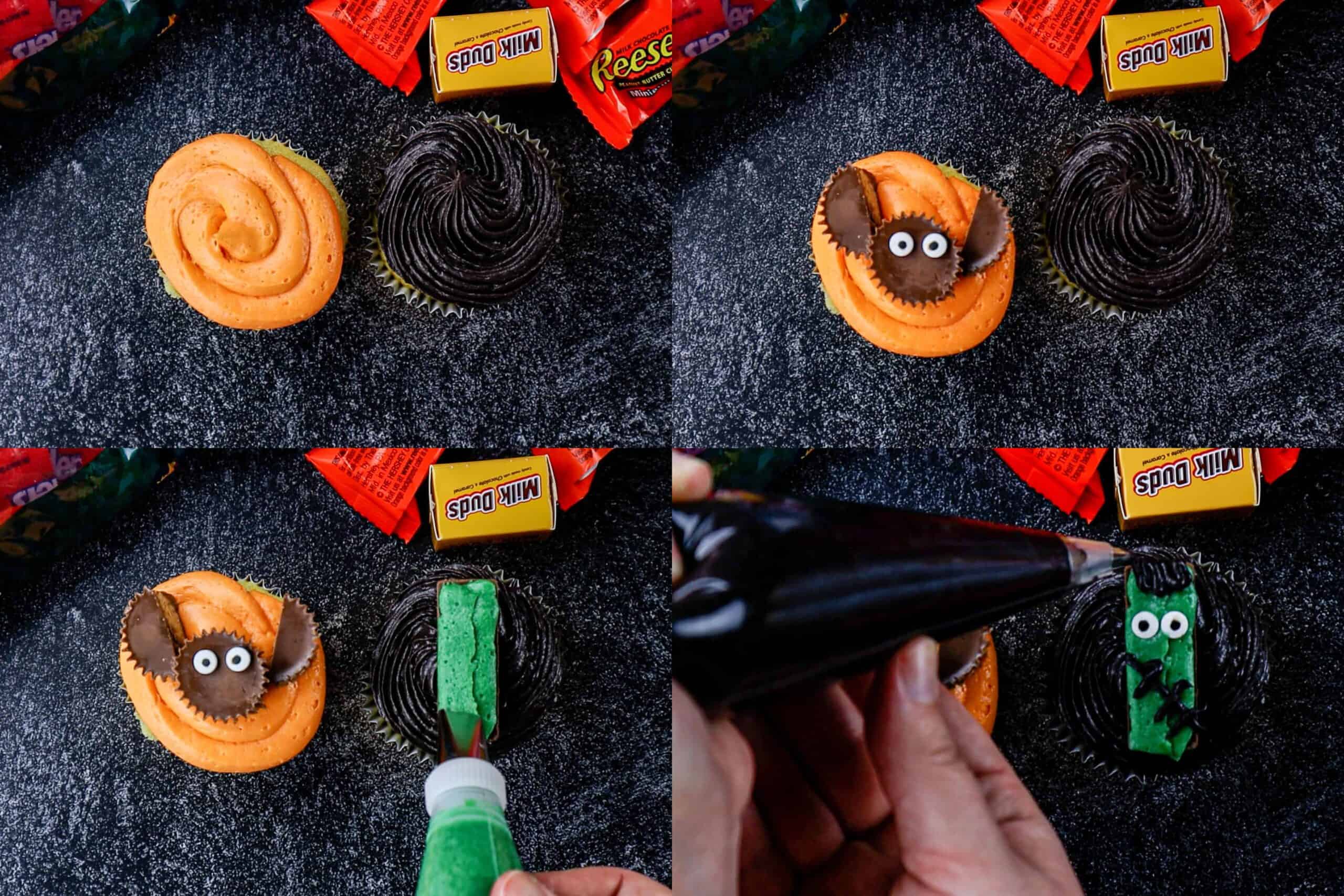 The Bat and Frankenstein Cupcakes are probably my favorite! They are so cute!

Halloween Spider Cupcakes: Use a Reese’s Peanut Butter Cup as the body and Twizzlers Pull’n’Peel pulled apart for the legs.

These Spider Cupcakes are so simple and so tasty! 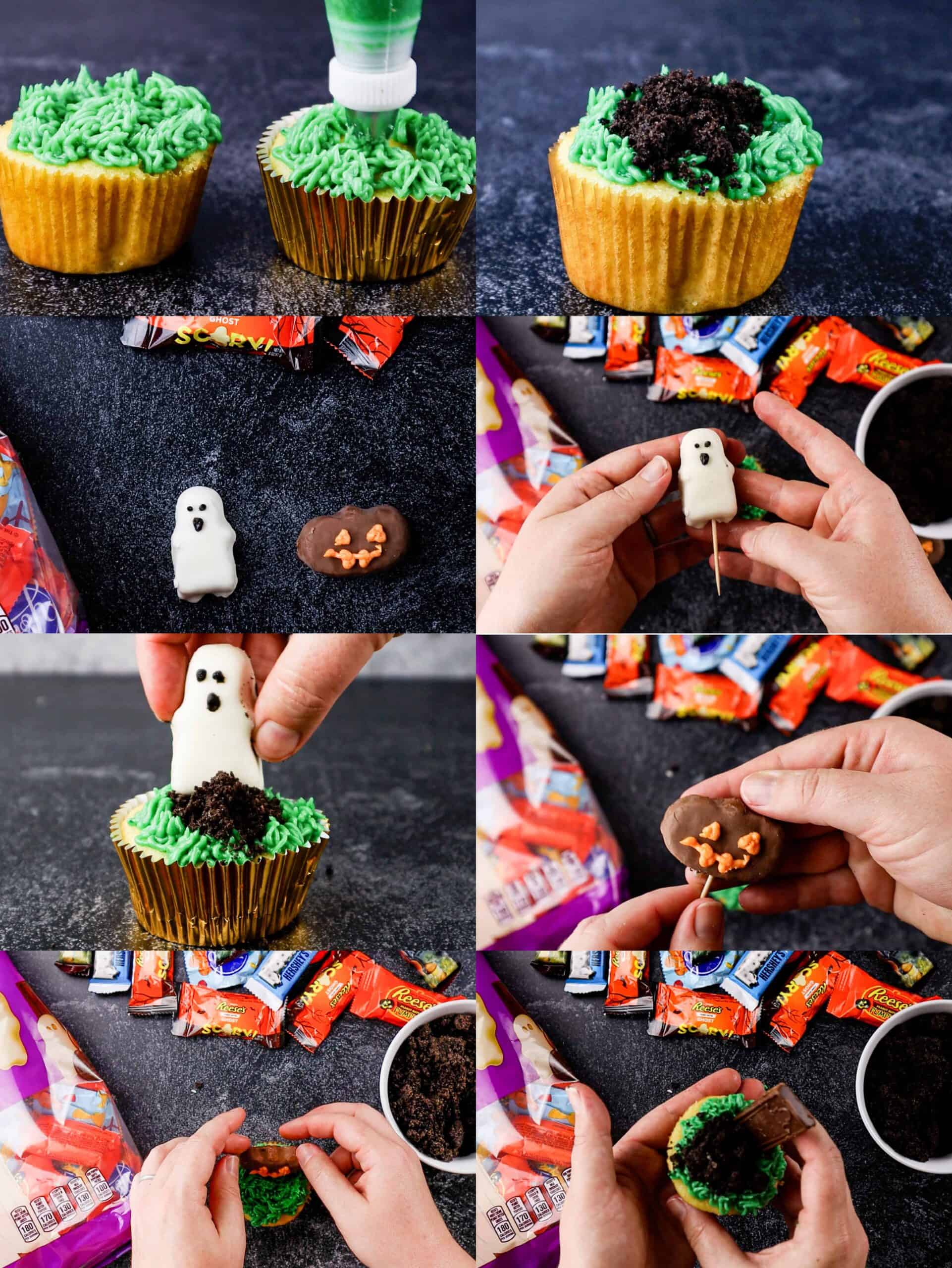 Love how easy these ghost, pumpkin, and graveyyard cupcakes are!

How to make Treasure Cupcakes: Use Jolly Ranchers crushed and whole to give a gem like appearance then add Gold and Silver Sprinkles as coins.  I also added some crushed Oreo for a dirt effect.

These Treasure cupcakes would work great with my Hidden Cache Cupcakes (where there are sprinkles inside the cupcake!). 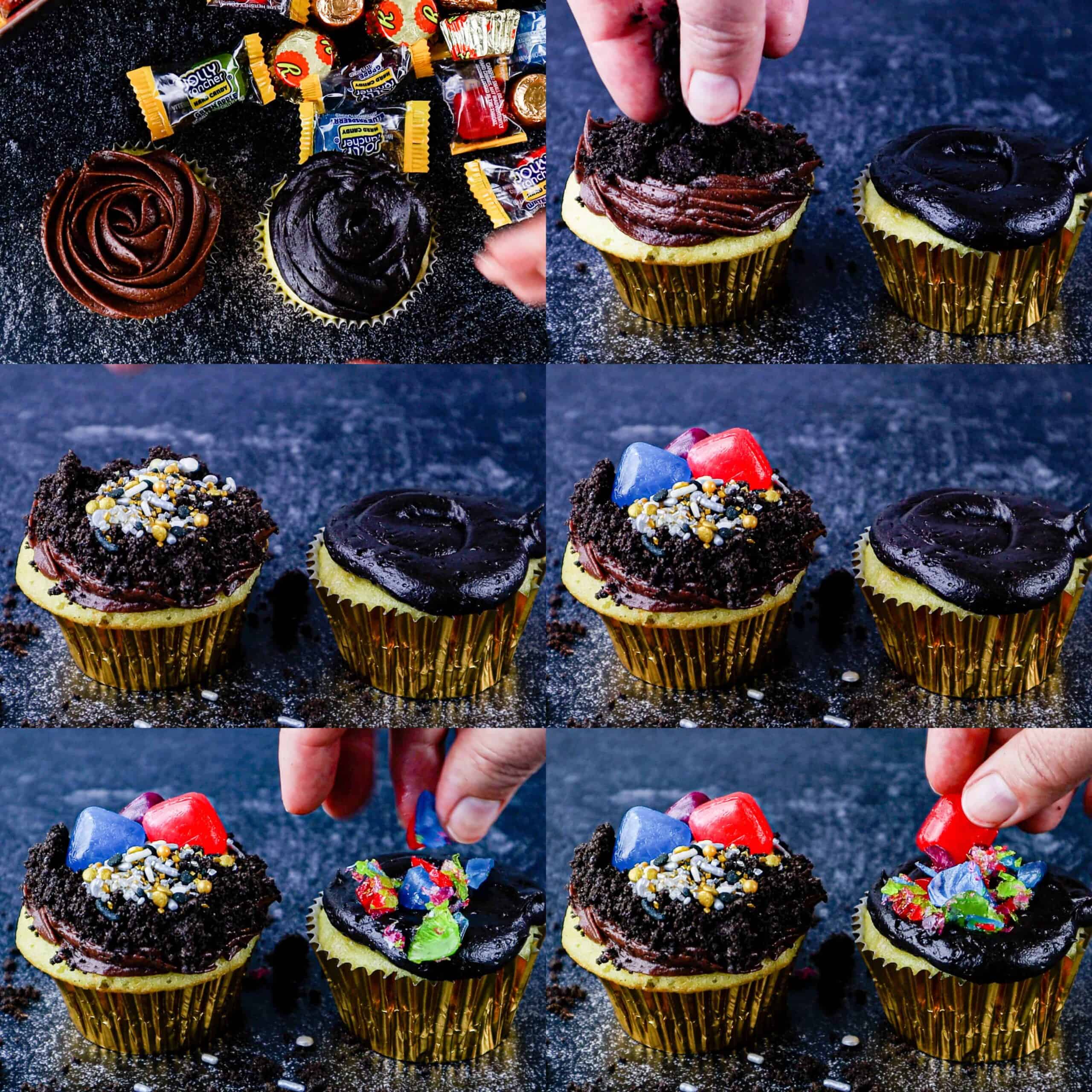 There is something so magical about these Treasure cupcakes!

Where did I get the Reese’s ghosts and pumpkins, Chocolate Tombstone, and square Jolly Rancher candy?

I found all the candy at Sam’s Club. The special Reese’s ghost and pumpkins and the tombstones all come in the same bag- called the Hershey’s Shaped Variety Bag. I believe they can be purchased at Walmart too- just maybe in a smaller quantity.

The square Jolly Ranchers come in the Hershey Treasure Chest along with Rolos and Reese’s Peanut Butter Cups. The box looks like a treasure chest which is pretty cool. Not sure if they are found anywhere other than Sam’s club. 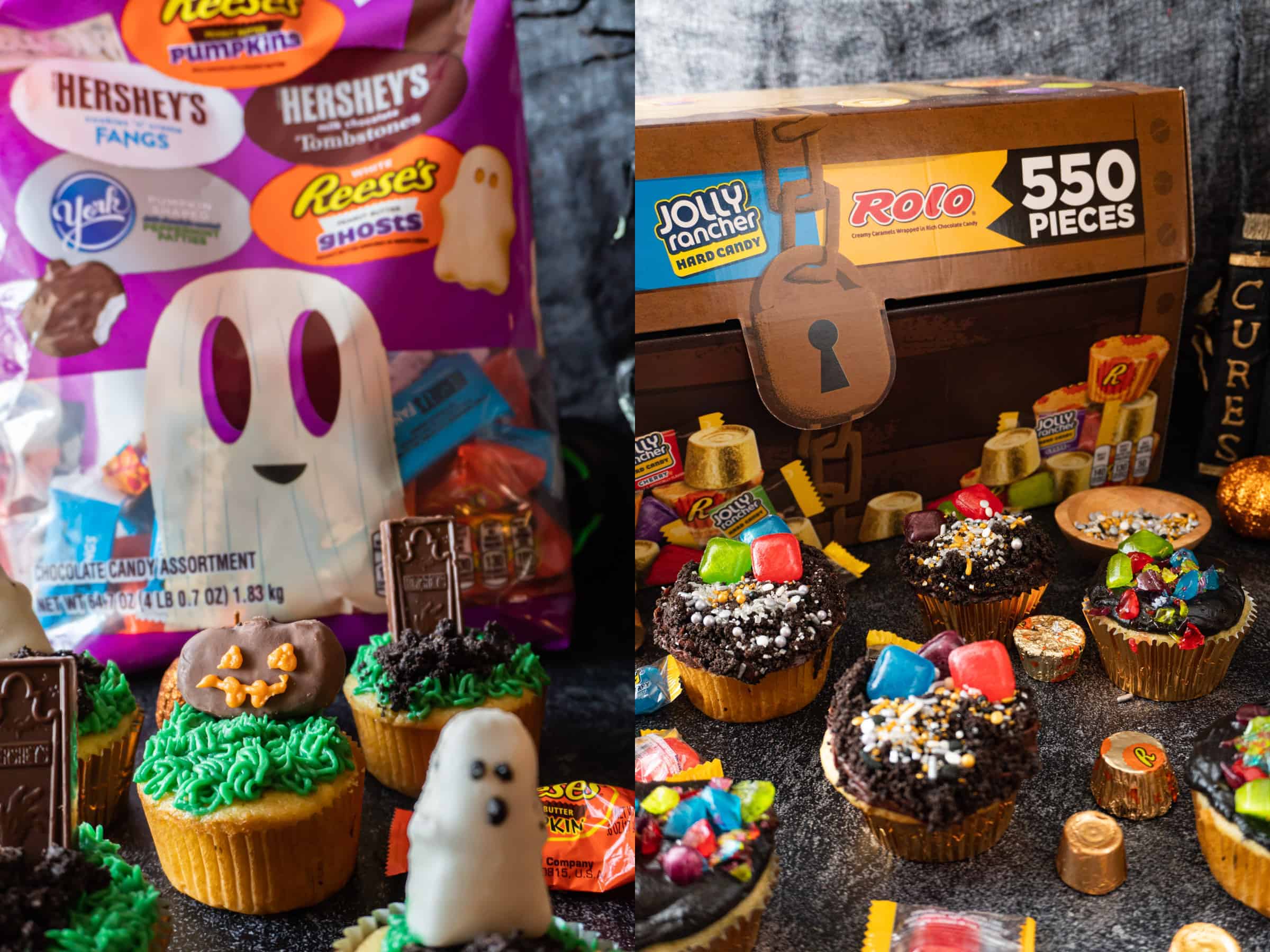 These are what I purchased from Sam's Club.

Using candy to make Halloween cupcakes is easy and fun. Whether it’s to DIY with kids or for a fun Halloween party- these are frightfully delicious!

For more Halloween treats check out: 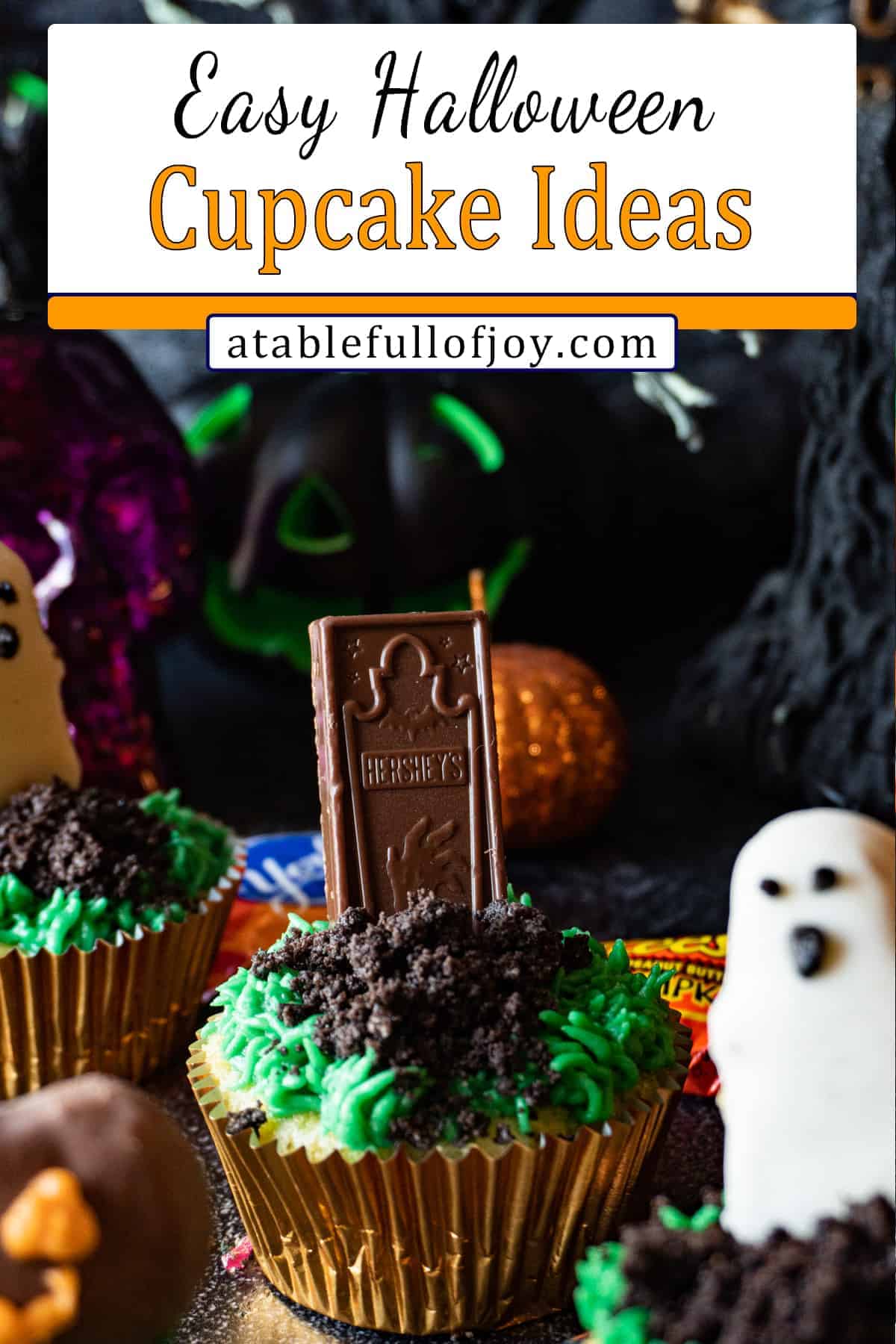 Don't forget to pin this recipe! 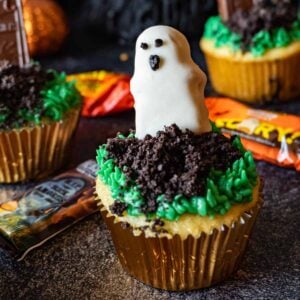 How to make Frankenstein KitKat Cupcakes:

How to make Reese’s Bat Cupcakes:

How to make Reese’s Spider Cupcakes:

How to make Ghost, Pumpkin, and Tombstone Cupcakes:

How to make Treasure Cupcakes:

Tips and Tricks Nutrition calculation is just an estimate of a cupcake with frosting. Actually nutrition breakdown will very on type of cupcake, type of frosting (and amount) , and type of candy used to decorate.