This white chocolate cheesecake is one of the best, creamiest, delicious cheesecakes I have ever eaten!

White Chocolate Cheesecake sounds fancy, but it is actually really easy to make- and you guys- it is like out of this world delicious.

I actually entered this recipe into a competition and it won. No surprise- because it is that good.

Check out these other tasty desserts too:

This cheesecake is so creamy- almost custard like- it is the ultimate cheesecake that you don’t want to miss!

Topped with my favorite blackberry sauce makes this the best cheesecake recipe ever. Yes, I said it! The BEST!

Let’s start at the beginning – with the crust!

How to make white chocolate cheesecake?

How to bake cheesecake?

Why do the cream cheese and eggs have to be at room temperature?

This is to make sure everything mixes in correctly/smoothly. If the cream cheese is cold there will be chunks in the mixture and that won’t bake properly. If the eggs are cold, they won’t mix in as well either.

Why is my cheesecake jiggly?

What makes a cheesecake set?

How to keep cheesecake from cracking?

Do I have to make a water bath cheesecake?

I have found a water bath is the best way to bake this cheesecake. It always comes out perfectly baked and never cracks.

What pan do you use to make a cheesecake?

I use a 9-inch springform pan. A springform pan is important so you can remove the sides of the pan after you are ready to serve.

How to cut cheesecake:

Using a sharp knife- slice the cheesecake, then wipe the knife clean, then cut again. Cleaning the knife between every cut will keep the cheesecake slice nice and sharp.

As if this white chocolate cheesecake isn’t delicious enough, I love to top it with a homemade blackberry sauce!

How to make the blackberry sauce?

Do I have to use blackberries?

Nope! This would be delicious with raspberries too.

Can I make the sauce thicker?

Yep, you will simply want to boil the blackberry wine mixture for a few more minutes to reduce the liquid.

How to store blackberry sauce?

Refrigerate any leftover sauce in an airtight container for up to a week. Use leftover on pancakes, waffles, and ice cream! 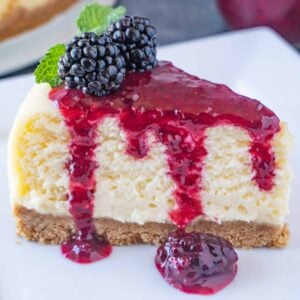 How to bake a cheesecake?

How to make Blackberry Sauce

Tips and Tricks *Having the cream cheese at room temperature will allow it to mix in smoothly. If it’s cold there will be chunks and no one wants that. * Eggs at room temperature will also mix smoothly in. *To press the graham cracker mixture in firmly I will use my hand and even a cup sometimes. *If you want the crust to come up the entire side of the cheesecake double the graham cracker crust recipe. *The foil is to help keep the water from the water bath out, because some springform pans will let the water into the crust and you don’t want that. That being said, I always find water inside my foil when I am done baking but thankfully my springform pan has a tight seal. I guess I need to practice my foil wrapping skills! *Cooking in a water bath and allowing the cheesecake to come to room temperature after baking prevents the cheesecake top from cracking. *To cut a cheesecake clean the knife after each cut- that way you will get a nice clean cut every time.