Cinnamon Roll French Toast! Is it a cinnamon roll or is it french toast?! It’s both and tastes so good you need to make it right away!

Cinnamon Roll French Toast is one of those delicious treats that make for a special breakfast!

PIN NOW AND SAVE FOR LATER! 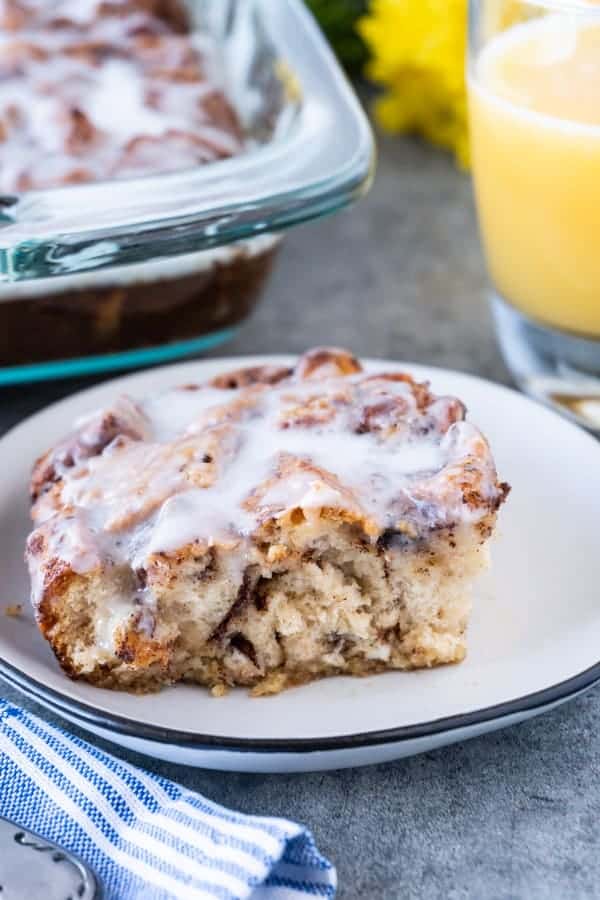 Inspired by Hearthstone’s Chameleos card from the Witchwood Expansion, I thought this recipe was perfect to represent the transforming reptile! I like to think of this dish as a cinnamon roll transforming into french toast! To see my entire Hearthstone Menu click here!

My husband who is amazingly creative and talented thought it would be cool to draw Chameleos on top! It turned out so good! 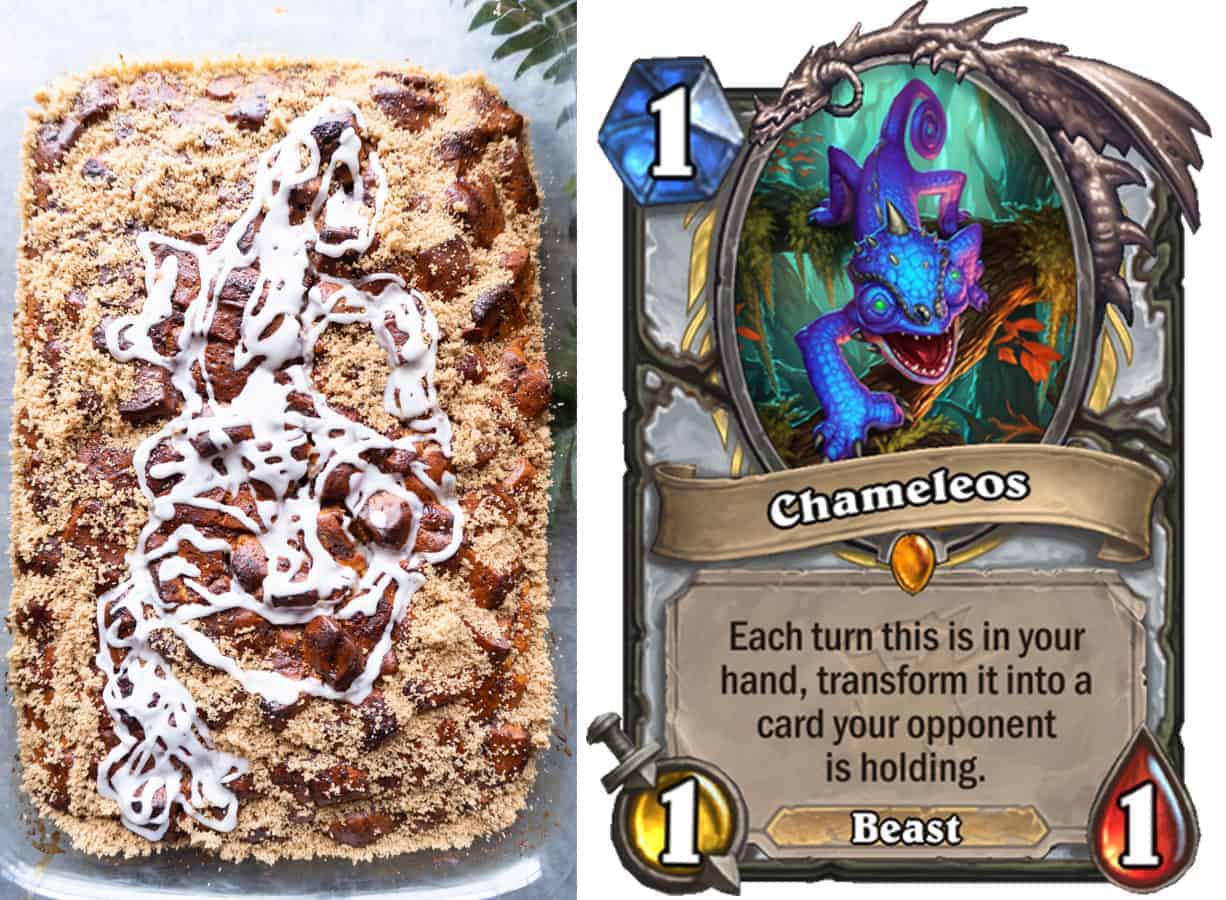 He then used a piping bag to draw Chameleos with the cinnamon roll icing!

It turned out amazing! But if you or your significant other is not an artist, have no fear, you can still make this easy cinnamon roll french toast!

Why is my cinnamon roll french toast a little soggy on the bottom?

You want to make sure you bake this cinnamon roll french toast casserole until it is cooked all the way through! I know Tasty put out a very similar recipe to this and said to bake it for only 25 minutes! 25 minutes will leave you with a half cooked breakfast- no one wants that!

I recommend baking for 45-50 minutes. Make sure to place some foil over the dish about halfway through so you don't burn the top though!

Take it out after 45 minutes, lift out a piece to check the bottom and either frost and eat or cook for a few more minutes.

Bake this cinnamon roll casserole for at least 45 minutes. You may even need to cook it up to 55 minutes. Check the casserole at the 35 minute mark and if it is getting too dark on the top, simply cover it with foil and then continue bake.

Besides the delicious breakfast this makes, your house will smell amazing! 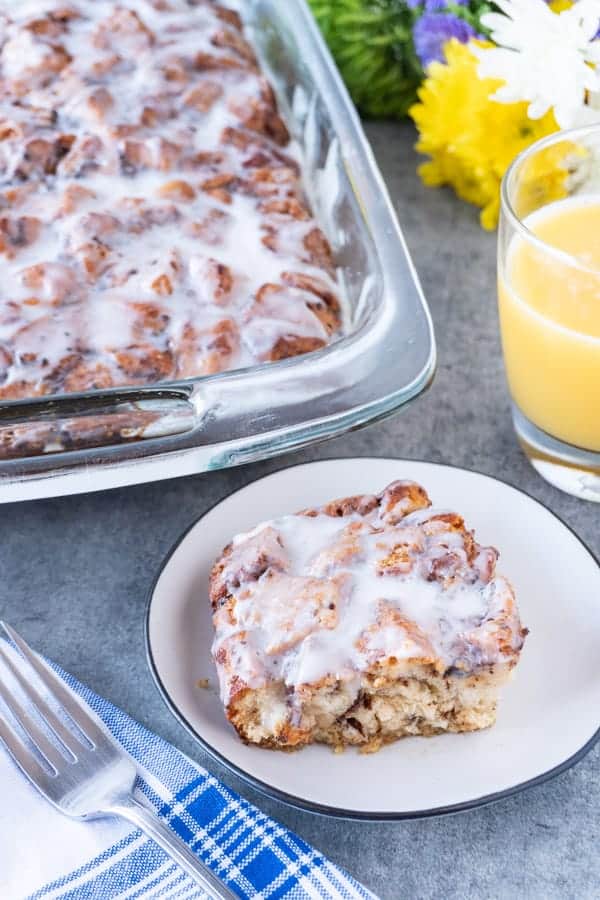 If you are wondering what Hearthstone is all about read more about it here. In general it is a super fun, online card playing game that is free to play!

For other Hearthstone inspired recipes check out my full Hearthstone Menu and check back for new recipes coming out soon!

While you are here don’t forget to check out my Breakfast Burrito Recipe, Zucchini Hash Browns, or my delicious Green Smoothie! 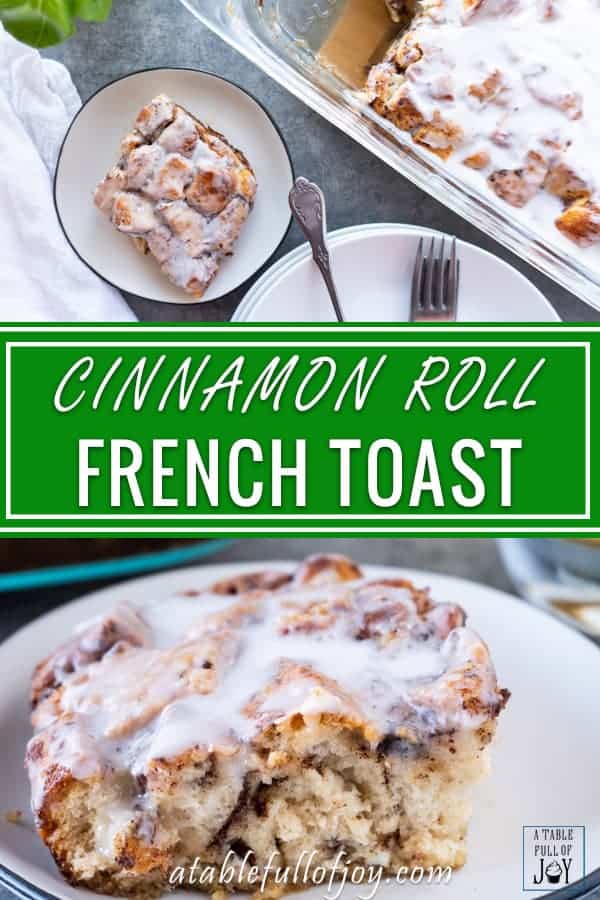 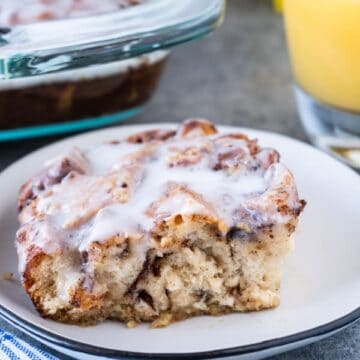 Author: Lisa
This Cinnamon Roll French Toast smells amazing when baking and tastes even better! Is it a cinnamon roll or is french toast? It’s the best of both! This is a delicious treat any day! Enjoy with a hot cup of coffee or a cold glass of orange juice- either way you are in for a treat!
5 from 1 vote
Print Recipe Pin Recipe
Prep Time 10 mins
Cook Time 45 mins
Total Time 55 mins
Course Breakfast
Cuisine American
Servings 12 people