This fun Twice Upon a Cupcake is a copycat of the Christmas Cupcake from the Magic Kingdom! With a funfetti top, delicious vanilla buttercream, a red velvet hidden mickey - this cupcake is so much fun!

The Twice Upon a Cupcake debuted in Magic Kingdom and has been all over Instagram. With it’s fun hidden mickey and festive Christmas tree look I can see why!

Since last year I shared my easy Christmas Tree Cupcake I thought I'd give this fun cupcake a try!

If you are at Magic Kingdom you can find the original cupcake at the Main Street Bakery inside Starbucks off of Main Street. The cost per cupcake is $5.99 and is big enough to share!

Since I won’t be getting to Walt Disney World anytime soon, I knew I need to make a version of this cupcake so I could have one at home! I wanted to share this with you too!

If you make these cupcakes please tag us on Instagram at @atablefullofjoy! We love to see your creations!

Let’s share some Disney Christmas Cheer wherever you are!

How to make the cupcakes:

How to make the hidden mickeys:

How to make the funfetti tops:

How to decorate the cupcake:

What frosting do you use?

If you don’t want to make the funfetti top- I recommend just using greet buttercream to make a Christmas Tree swirl like these cupcakes.

Wait you use box cake mix?! What about making it from scratch?

Yes, I used box cake mix because I wanted to make these as simple as possible.

If you want to upgrade your box cake mix with a few additions to make them taste amazing you can totally do that. Check out my white cake mix upgrades here (do this for both funfetti and white cake mix in this recipe).

If you have a great from scratch recipe for all the cake types and want to use them go for it!

Differences between the copycat cupcake and the original:

What to do with leftover funfetti scraps?

I recommend adding a little frosting and dipping in some candy melts to make my super easy cake pops!

If you like this recipe make sure to check out our: 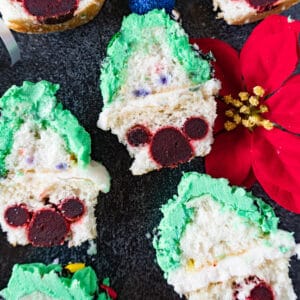 Twice Upon a Cupcake Copycat

Vanilla Cupcakes with the Hidden Mickey:

How to decorate the Twice Upon a Cupcake: