If you are looking for some of the other tasty Disneyland Beignets recipes make sure to try the Candy Cane Beignets and the Hot Cocoa Beignets!

Going to the parks pretty much requires a stop at the Mint Julep Bar at Café Orleans in Disneyland.  Not only for a tasty mint julep but for a bag full of fresh warm beignets!

Where can I buy Mickey Mouse Beignets?

Beignets can be purchased at the parks for $4.99 for 3 or $8.49 for six. There is nothing like shaking that bag full of beignets and the poof of powdered sugar that comes out once it’s opened!

However, even if you can’t make it to the parks, you can make beignets at home!

Not Disneyland but there is a mix sold in Downtown Disney. This box of Café Du Monde Beignet Mix is sold at the Ralph Brennan Jazz Kitchen in Downtown Disney and is the closest thing to a Disney Beignet Mix that you will find, and now you can buy it on amazon and even at some local grocery stores! (affiliate link)

Is this the original Disneyland beignets recipe?

Yes and No. The original recipe that was released from the Disney Parks website was altered from a larger batch recipe before they released it to the public and when I tested it the beignets were ok but not what I was used to from the parks.

After a few tweaks, primarily to the yeast amount, I think the recipe here is better, mainly because the proportions of the ingredients are perfect for a smaller batch.

What you need for Disneyland Beignets?

What are Disney Beignets made of?

Disney Beignets are a dough mixture made of flour, sugar, a yeast, that are fried and dusted with powdered sugar.

How to make Disneyland Beignets?

Tips for the best beignets:

Dough: I like to fold the dough in on itself after it rests for 30 minutes to get a nice smooth surface. This isn’t absolutely necessary, but it will make for a smoother and more uniform beignet after frying.

Rising: Make sure your cut out dough rises in a warm place. If your house is cold simply preheat your oven to the lowest temperature (mine goes as low as 170°F for example), then once preheated turn our oven off and place your cut out beignets in the oven to rise. This is what I did since my house is pretty cold.

I love this thermometer from Thermoworks (affiliate link).

Fry your beignets for 15-30 seconds a side- until they are golden brown.

Beignets are best when eaten fresh and warm.

Temperature? How important is it?

If you don’t have a thermometer to check the water temp you can tell if the yeast is activated if the mixture gets very foamy after 10 minutes.

What is your favorite treat at Disneyland? Let me know in the comments below! 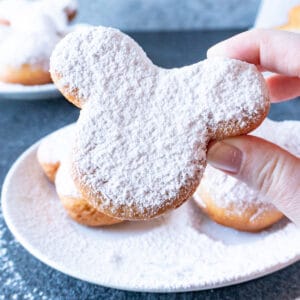