Cutting cilantro is really easy and will have your dishes tasting fresh and delicious. In three steps you will learn how to cut cilantro!

How to cut cilantro?

Best tool for chopping cilantro is a sharp knife. I prefer a chef’s knife because its length and width allow for easy gripping and cutting.

Do you include stems when chopping cilantro?

Typically, not the long stems. They can be eaten but will not have much flavor and a woodier texture when eaten.

You will get rid of the bulk of the stems when you cut them off before chopping the leaves. However, there will still be the softer top of the stems.

New growth stems that the leaves are attached to chop easily and aren’t noticeable when you eat the cilantro. If you are chopping and have a long piece of stem or two then you can easily pick them out.

What is the easiest way to chop cilantro?

Cut off the long base stem (or tear off a handful of the cilantro leaves in a fistful). Using a chef knife chop the cilantro from top of the bunch to bottom with a rocking motion, then chop side to side.

What size should you chop your cilantro?

For a pico de gallo salsa, or fajitas, I like to leave the cilantro a little bigger, but for something like a salsa verde I will finely chop the cilantro.

It should last up to a week in the refrigerator.

How to store cut cilantro?

Store in an airtight container in the refrigerator.

Can you chop cilantro in a blender or food processor?

Often if I’m making salsas, I will just add the cilantro to the food processor or blender I am using along with the rest of the ingredients and it will chop it nicely.

If you just want to use a machine to chop the cilantro I recommend a small food processor since processors don’t need any liquid to work.

How to store cilantro that hasn’t been cut?

Chop about ¼ inch off the bottom of the stems from the bunch of cilantro. Then place in a mason jar filled halfway with water and refrigerate.

This will help them continue to take in water and stay fresh longer.

Is coriander the same as cilantro?

In the US, coriander is the dried seed from the cilantro plant, and cilantro is the plant’s leaves and stem. However, everywhere else in the world the leaves and stems are called coriander and the seeds are simply coriander seeds.

If you like this article check out how to cut cantaloupe and how to chop parsley! 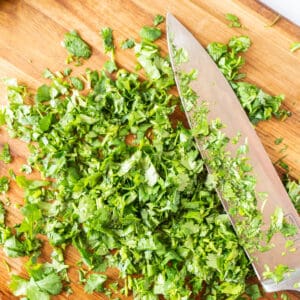 How to cut cilantro?