This easy caramel cinnamon rolls recipe comes together in 30 minutes, is perfect for a quick breakfast, and is very tasty!

Do you ever just want an easy but delicious breakfast treat? In the past I’ve shared recipes like my cinnamon roll french toast, breakfast tacos, and breakfast burritos, but I wanted to share a tasty and quick recipe for sticky buns.

Are they completely homemade? No.

I’ve got a recipe for homemade sticky buns that I am still perfecting, but sometimes you just need a quick recipe that still tastes delicious and will satisfy your sticky bun needs!

This recipe is perfect for potlucks, fun Sunday mornings, or just when you want to treat yourself to a more than nothing sweet breakfast.

How to make caramel cinnamon rolls:

The hardest part about this recipe is flipping it out onto a different plate, but I promise it’s not that hard!

What do you do with the extra cinnamon roll?

15 cinnamon rolls/stick buns fit perfectly into my 9x13 baking dish leaving one left out. I could’ve crammed the 16th roll into the dish, but I’m a sucker for a pretty finished product so I left it out, but you can add it to your dish if you want.

I placed the lonely cinnamon roll into a cupcake liner and baked it for 15 minutes. Then used the leftover cream cheese icing as some frosting and enjoyed it! That being said….

What to do with the leftover cream cheese icing?

You can use it to thinly frost some pumpkin cupcakes, or pumpkin bread (however, I much prefer my cream cheese frosting for that), or just use what you want on that leftover cinnamon roll and toss the rest. Alternatively, you can add it on top of the caramel cinnamon rolls for an extra sticky sweet treat.

Can I use the Grand Cinnamon Rolls?

Yep! This is actually what my mom likes to do when she makes these (my family loves this recipe!).

Buy two packs of Grand Cinnamon Rolls. They have 5 cinnamon rolls in each can. Place all 10 rolls into the dish just like you would with the smaller ones and bake the same amount of time.

How to invert the caramel cinnamon rolls onto another plate:

It’s easiest if you have a cutting board or large flat plate that will cover the 9x13 dish. Simply place that on top of the 9x13 dish and holding both the dish and the plate, flip over everything over.

If the cinnamon rolls have cooled longer than 5 minutes, they might stick to the baking dish for a little while. Just let gravity do the work and let them sit for 5-10 minutes until they fall onto the plate. Then remove the baking dish and eat up!

Overall, this is a really easy and quick recipe for when you want to make sticky buns but don’t want to spend all the time making them (aka multiple rises and kneading!).

If you like this recipe and want more easy and quick recipes let me know in the comments below!

For more tasty recipes check out: 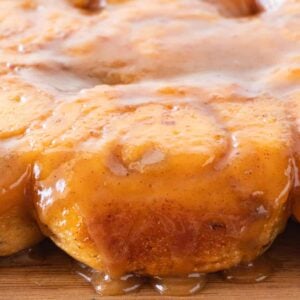